With social media marketing getting more visual, it is perhaps not surprising that many of the recently launched campaigns and news stories featured in this week’s social media roundup concern the use of great photos and videos.

Career Visions
It’s the time of year when new students are preparing for university, the first big step on their journey toward their future careers. In an effort to attract more student accounts, banking group HSBC has launched the ‘Your Future Self’ campaign.

marketing exercise has a large social media focus and aims to generate conversations between HSBC and the online student community. The campaign kicks off with four documentary-style short films about four individuals and how university shaped their subsequent career. They will be published on Facebook, LinkedIn and YouTube over a four-week period.

To tie in with A-Level (school leaving qualification in the UK) results, the banking institution has also launched a ‘future selfie’ competition. Students are being encouraged to upload a picture that demonstrates their vision of where they want to be in a few years’ time. The most imaginative pictures will be in line for prizes.

Important Health Messages
Following concerns from some parents, Johnson & Johnson came out with a campaign earlier this year to say it had removed formaldehyde from its baby shampoos. It is now reiterating this message in a social media push.

healthcare company will be launching 40 videos over the course of the ‘Our Safety Promise’ campaign. The aim is to address concerns about chemicals in its products. The first video commences with the message, “Although always safe, for your peace of mind, we removed them”.

The initiative is a smart move by Johnson & Johnson as social media is allowing it to engage directly with its consumers about issues that matter most to them. Numerous studies have shown that one of the key factors that determines whether consumers will do business with a brand is customer service, and how quickly issues, comments and complaints are dealt with.

Musician Leaks his Music in Viral Campaign
We are used to hearing about online leaks of movies and music, but it isn’t often that you discover that it’s an artist who is doing the leaking. Ahead of the launch of his forthcoming album Moonshine in the Trunk, country singer Brad Paisley has been leaking previews of songs on Twitter and YouTube. 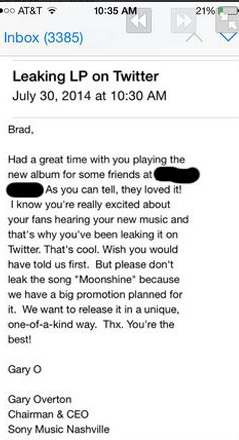 The recording star says his record company hasn’t approved this use of his social media accounts. Paisley has even posted photos of email correspondence with the boss of his label. According to reports, his record company has mixed feelings about the campaign, with some employees saying its cool, while others are wondering if it could do any damage.

Paisley is also enlisting the help of others to tweet previews of his music, such as his wife, Kimberly Williams-Paisley, fellow singers, comedian Joan Rivers and an elementary-school classmate. So far, the campaign is achieving its aim of attracting attention as it has gone viral and been picked up by the mainstream media.

Say Hello to Chicago
To celebrate the start of its Chicago route, Emirates Airline is launching a brand new campaign on August 5 across all its social media channels. The promotion is inviting people in Chicago to spell “H-E-L-L-O” using pictures taken in the windy city.

Although Chicago is the 9th U.S. destination for the airline, the global company still doesn’t have a strong presence in the states, but it is hoping this will change with initiatives such as the campaign.

week the airline will post its own pictorial letter from Dubai such as an “L” written in the sand. Followers will be asked to return the greeting by taking a picture of the same letter in Chicago to be posted on Instagram, Twitter or the contest website using the #HelloChicago hashtag.

To encourage people to participate, several pairs of round-trip tickets to Dubai are up for grabs, and select submissions will be chosen to feature in a shared online greeting from Chicago to the world.

Viva Florida
Tourist officials have launched a social media campaign to promote the culture and heritage of Northwest Florida. The “Viva Florida” campaign started last year with events throughout the state, but it has also now moved online.

It is encouraging visitors and locals to share posts and photos to social media sites such as Instagram and Facebook using the hashtag #DiscoverNWFL. What’s more with #DiscoverNWFL, visitors to some attractions can follow the hashtag to learn more about them as well as connecting with other visitors.

“It will bring awareness to the inland areas of Florida, where rich history abounds with uniqueness such as Florida Caverns and our pristine waterways,” said Pam Fuqua, executive director of the Jackson County Tourist Development Council.

News
A quick roundup of some of the most interesting snippets of social media news of the last week.

Fresh, Original Pictures
Tired of clichéd photographs of skyscrapers of Sharjah, Reem Saeed, a social activist launched #Sharjah1000, a community-based project that aimed to garner 1000 varied images of the emirate within a month. They were to highlight the artistic creativity, diversity, passion and patriotism of residents and visitors. 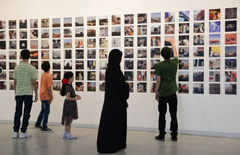 Within 19 days, 1000 pictures had been sent in by 80 participants, and the best photographs are now on show in the #Sharjah1000 exhibition at the Sharjah Art Foundation.

Top Colleges
As part of its America’s Top Colleges package, Forbes asks colleges to send in pictures of their campuses. Every year they receive the same sort of shots, so this year, for the first time, Forbes asked students, alumni and faculty to go social to say what makes their school the best.

The initiative received 8,000 Instagram posts and 35,000 tweets, and the winning photos can be seen here.