It’s been another great week of social media campaign launches, with top brands coming up with ever more inventive and engaging ways of providing followers with rich content and exciting opportunities. Here are four that grabbed our attention:

Ripped Like The Rock
Paramount Pictures has created a novel social media campaign to promote Hercules, a movie starring muscle mountain The Rock. In order to get in tip-top shape for filming, the actor and professional wrestler endured a tough 20-week training and diet regime that he says was his most gruelling movie prep work to date. 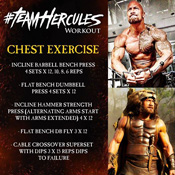 Now social media followers can get ripped like The Rock with #TeamHercules, a social media push to help people get motivated and active. Followers can get access to The Rock’s workouts, diet information and motivational videos by pointing their cursors towards his Twitter, Facebook and Instagram accounts.

There are also ample opportunities to engage with other participants by using #TeamHercules. In addition, fans are being asked to submit their own photos and motivational messages.

Famous Bottoms Get Behind Social Media Campaign
If there’s one sure-fire way to get a lot of eyeballs looking at your latest social media campaigns it’s to get a gorgeous celebrity to front it. Even better if they’re wearing nothing but their undies.

Calvin Klein’s social media campaign ‘My Calvins’ sees some of the world’s most attractive female celebs such as Daisy Lowe, Ellie Goulding and Miranda Kerr posting revealing selfies (with the hashtag #mycalvins) in their CK underwear. Members of the public are also being encouraged to post their own selfies.

By now, most companies jumping onto the World Cup social media bandwagon have launched their campaigns. One of the latest is Ladbrokes who recently unveiled ‘The Big Score’. This is an accumulator-style betting competition run on Facebook where the crowd decides on a number of daily bets and how much virtual money to wager.

Each time a player places a virtual bet they will be entered into a prize draw. The winner will pick up a nifty £5,000 UK Sterling prize while two runners-up will receive £1,000 each. A further £3,000 will be up for grabs throughout the event.

David Moscardini, Social Media Manager at Ladbrokes, said: “The BIG Score is a fun, daily competition which we hope will generate additional excitement around what is already the most hotly-anticipated World Cup of all time.”

A Hunt for Design Influencers

Decorex International is a leading interior and design show. To generate publicity for the 2014 event, the company has once again embarked on a social media campaign to find the top interior design influencers on Twitter.

Through the #Decorex100 hashtag, members of the design community are being encouraged to nominate their favourite interior design tweeters. Winners of the 3-week campaign will be decided by public vote and the decisions of the Decorex team based on content, engagement and Klout score.

Sizzling Hot Social Media News
Smashburger, the American chain of fast casual burger restaurants kicked off the #SmashRoadTrip social media campaign in May to raise awareness of its regional burger recipes. Since then, the company has seen a mouth-watering 2 million campaign impressions and 20% increase in reach. 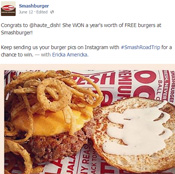 The campaign is based on a road trip tour of a number of US states. In each market Smashburger is giving away free burgers for a year to one participant. All the public has to do to be in with a chance of winning the free meat feast is to post their favourite Smashburger photo to the company’s Instagram account.

In other social media news, experts are predicting that the World Cup will become the most social sporting event ever, generating more online buzz than even the Olympics. There are no hard and fast figures at the moment, but in the year leading up to the first match, the World Cup was mentioned 19 million times across blogs and social outlets (including Facebook, Google+, Twitter and YouTube) tracked by Adobe Digital Index.