Each week, forward thinking companies are dreaming up novel ways of connecting with their consumers and reaching new ones via social media. Between contests, content, quizzes, videos and image sharing there are many ways for brands to attract attention.

Followers are more than happy to spread the word about a company when they are engaged, entertained and stimulated. The companies highlighted below are trying to do just that with their recently launched social media campaigns.

For six weeks, LV will broadcast six how-to cook videos, and two of the films will be hosted by the culinary superstar. The agreement will also see LV as the sole advertiser on the channel for the duration of the campaign.

LV’s e-commerce director, Paul Wishman says this is “an important step” in the company’s strategy to expand its social media presence. The first video will be shown on Saturday 14th June with consecutive videos shown on the following five Saturdays.

Going for Goal
The biggest football competition in the world kicks off this week, and social media is at the front of global marketing efforts by numerous companies. The Listerine brand (Johnson & Johnson Consumer Companies, Inc.) has just launched its “Power to Your Mouth” social media campaign to tie in with the soccer fest. 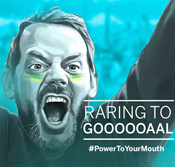 Through its social channels and the hashtag #PowertoYourMouth, Listerine will react to all the news on and off the pitch and recap the day’s biggest matches. Two newsrooms staffed by sports experts have been set up and they will deliver real-time content in several languages on Twitter and Facebook.

Each post will read like a newspaper headline and will include an original illustration. The content won’t all be about football as oral care health messages will be mixed into Listerine’s Facebook and Twitter streams. The Listerine brand will also optimize its marketing on these two channels.

It will do this by buying ads on mobile and desk top in real-time based on which posts and tweets are generating the most engagement. Gail Horwood, vice president, Worldwide Digital Strategy for Johnson & Johnson Consumer Companies says the campaign is a really big step for the company:

“This campaign represents the first time one of our consumer brands has leveraged real-time social marketing on a global scale.  We are harnessing the power of a major global event to connect with football fans by helping them fuel conversations about matches in a highly relevant way.”

Unsurprisingly, international football stars are being used as the faces and focal points of current social media marketing endeavours. Cristiano Ronaldo, the captain of the Portugal national team and a player with Spanish club Real Madrid is no stranger to endorsements.

This week sees him as the star of Herbalife’s new social media push. The nutrition company has launched “CR7 Driven to Perfection” a social media call out to fans to submit videos that describe what drives them to succeed. The winning film will be highlighted on Ronaldo’s Facebook page.

Happy Father’s Day
In many countries, Sunday 15th of June will be Father’s Day which has prompted international doughnut company Krispy Kreme to come up with a novel social media campaign in India. They have created a Facebook app on the Krispy Kreme India page that allows users to type in a 15 character message that will be printed on the sweet treats. Once payment has been made, Krispy Kreme will send out the special customized pack of doughnut goodies to the lucky fathers.