With more than one billion active users, one seventh of the Earth’s population, Facebook is the most powerful social media #socialmedia network on the planet. As businesses need to be where their customers are its potential as a marketing #marketing tool is huge.

Everyday companies of all sizes and genres are pumping millions of advertising dollars into Facebook #Facebook. The more money they splash out to put their businesses on the map, the more they want to know if their investment is actually worth it.

Are the financial and human resources they pour into it yielding a significant return on investment #ROI?

Creating a Facebook page has now become standard practice for business owners with a social media strategy. This is free, but companies can also pay for advertising. The cost of Facebook ads #facebookads is up to advertisers as they can set daily or lifetime budgets.

There are two payment models: cost per click (CPC) #CPC means that companies pay when someone clicks on the ads and cost per thousand impressions (CPM) #CPM means that payment is made for each 1,000 people that have seen the ad. 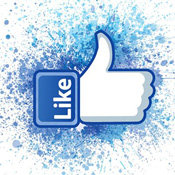 There is no doubt that social media marketing is here to stay, but social media metrics are still a long way from being defined clearly. For example, no financial value has yet been ascribed to a ‘like’ or a status update.

Even so, Facebook is ringing the cash registers of numerous companies. In the UK, the makers of Kit Kat, the chocolate-covered wafer claim Facebook has created the highest ROI #ROI of all the media channels it uses, making £1.34 for every £1 invested.

The social media giant was responsible for 11% of its sales #sales. A company spokesperson said that Facebook was the best medium for “brand impact and overall brand equity, compared to other online channels and television advertising”. 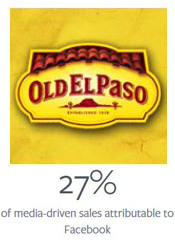 During a media campaign to promote Old El Paso products General Mills found that 27% of sales were due to Facebook. The American Fortune 500 corporation says that Facebook was the most efficient channel for driving sales.

A study of online fashion and beauty store ASOS showed that the e-tailer achieved a 130% increase in sales through its Facebook campaigns. This is because the 28 million friends of the company’s 630,000 followers (during the time covered by the study) were exposed to their marketing messages.

Increase in Purchases
These success stories are bolstered by studies that show that consumer exposure to Facebook ads can result in more purchases. 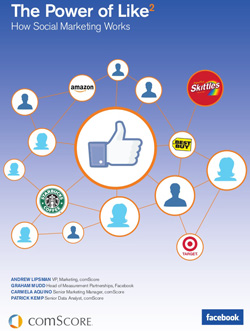 The Power of Like 2, a 2012 report by Comscore and co-sponsored by Facebook was based on a four-week study of two test groups of fans and friends of fans of Starbucks and Target. One group was exposed to branded media and the other received no exposure.

Improved Returns
To date, many companies haven’t been too concerned with Facebook ROI #FacebookROI. It has been enough to be a part of the global conversation, enhance relationships with customers and earn the trust of the tribes that surround their brands #brands.

But now they want hard numbers on the conversations and interactions. Recognising this need, Facebook has developed an ROI measurement tool. The system allows marketers to see how many people clicked on an ad or a sponsored page and then took a desired action.

Facebook is devoting a lot of time and energy into building confidence among the advertising #advertising ecosystem. If the social media network can prove its worth to companies by helping them to boost their bottom lines more businesses will seek out a slice of this massive marketing platform.