Big news in the social media sphere this week. Buzz Aldrin, one of the astronauts on the Apollo 11 mission to the moon is launching a campaign to commemorate the event. Other new campaigns including a hilarious and inventive Twitter and video project from fast food chain Wendy’s. This is another example of how brands are thinking creatively to ignite the passions and interest of their audiences to get people talking.

A Giant Leap for Social Media
The second man to walk on the moon, astronaut Buzz Aldrin, has started a social media campaign to commemorate the 45th anniversary of the momentous Apollo 11 flight. The moon landing was one of the biggest ever scientific and human achievements when Neil Armstrong and Buzz set foot on the lunar surface, while Michael Collins orbited in the command module.

has set up a Twitter hashtag, #apollo45 where people are invited to write details of their reminiscences. There is also a YouTube channel to leave video messages. And who knows, maybe the astronaut will tell stories and provide fresh insights into the mission that have never previously been aired.

According to reports, a cluster of celebrities will also be taking part, sharing their memories of that momentous time in 1969 when approximately 1 billion people watched events unfold on television. Among those rumoured to be taking part in Aldrin’s social media campaign are Sir Richard Branson, John Travolta, Quincy Jones, Tim Allen and London Mayor Boris Johnson.

Cheesy Song and Video Fest
July the 4th was a big day for Wendy’s. The fast food restaurant chain brought back its popular Pretzel Bacon Cheeseburger and Pretzel Sandwiches. To publicize the event, the company also revived its #PretzelLoveSongs social media campaign, a hilarious and creative way to reach and entertain its audience.

target="_blank">first one, featuring non-celebrity singers is already out, but future ones will see Boys II Men and Jon Secada turning fans tweets into tunes.

Wendy’s is keeping the same recipe for its social media campaign that proved to be such a huge success in 2013. Last year, more than 85 million users saw its “Pretzel Love Songs” social media campaign on Facebook. This year’s campaign will also feature Wendy’s red-headed mascot making love song music videos, and karaoke booths in a number of markets.

Fashion Forward
To promote his Fall/Winter 2014 -15 collection, fashion designer Marc Jacobs has eschewed professional models and opted for members of the public. They were selected entirely through Instagram and Twitter. The brand posted an open call on their social media channels asking people to send in snaps of themselves tagged with #CastMeMarc.

than 70,000 fashionistas from all over the world sent in their pictures and nine winners were selected .They were then professionally photographed and styled. This neat initiative has generated lots of publicity for the fashion house, not only in traditional offline media, but also in the online world.

It generated a lot of buzz and social media chatter at the time of the launch, and in the last few days as the winners have been selected. This has given Marc Jacobs several bites of the marketing cherry.

Save the Undies
U by Kotex sells feminine hygiene products, and to promote 3D Capture Core, an innovation dimension to feminine care protection, it has launched a social campaign to get women to talk about their undies. More specifically, women are being asked to share stories about how feminine pads have failed them and ruined their underwear. They are also being encouraged to offer tips to stop it from happening. The campaign hashtag is #SavetheUndies.

Summer Safety
Social media campaigns are not just helping companies to generate audiences, they can also serve communities and the common good. This may also provide inspiration for those businesses looking for ideas for their next social media initiative.

Turlock, a city in California has created a summer social media campaign to help residents stay safe. Launched on July 4th, the project shares information sheets, tips and recommendations and will continue until Labor Day. Good original content is a smart way to attract attention. Turlock’s police force is leading the campaign on Facebook.

Social Media News
Here are some tasty titbits of social media news, which is dominated by the success of the World Cup, an uber popular event on social media that companies are benefiting from. Aligning your campaign with popular events or happenings can be a super savvy way of getting some instant social media love.

Best foot forward – Nike has claimed that its social media campaigns and advertising (traditional and social) particularly during the FIFA World Cup 2014 has boosted its performacance better than projections anticipated. According to Nike, revenues rose by 11 percent to reach $7.4 billion. The Nike brand product sales increased by 13 percent to break the $7 billion mark.

President and CEO of Nike, Mark Parker, said: “An ongoing two-way dialogue with consumers is a critical element of our digital ecosystem.” He added that this interaction is also good for innovation as it drives insights that boost connection between the consumer and the company’s various brands.

“Through our social media platforms, we leverage the power and passion of sport to deepen our relationship with our consumers.”

World Cup by numbers – In other World Cup news, Facebook has passed the 1 billion mark in World Cup interactions. To date, no other single event has generated as much social media chatter on its pages. According to Facebook, more than 220 million people have posted comments, or “liked” something they’ve seen or read. So far, the game that has generated the most activity was Brazil’s opening match against Croatia. 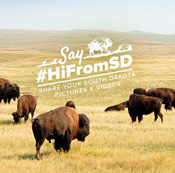 Come to South Dakota – The South Dakota Department of Tourism is currently promoting parts of the state to tourists with a new social media campaign. To get visitor numbers up it is asking people to share their South Dakota experiences, videos and pictures by using the hashtag #HiFromSD. The hashtag is used in all the department’s social media activities and within a month and half it has already received more than 1.5 million views.