Eyes down for this week’s raft of new social media campaigns. With the start of the 2014 FIFA World Cup only a few days away, football themed initiatives feature strongly as companies seek to capitalize on this massive global event.

Social Buzz Builds as World Cup Kick-off is Imminent
FIFA, the international governing body of football has launched its impressive social media campaign for the forthcoming World Cup tournament in Brazil. Football fans will be able to sign up to its Global Stadium, an online and mobile hub where they can receive minute-by-minute updates about what is happening on and off the pitch and engage with fans, players and coaches. 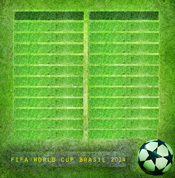 The stadium will be open for each of the competition’s 64 matches and users will receive team news, be able to vote for the man of the match and have a chance of winning the kick-off football. During the tournament, FIFA will use the hashtags #WorldCup and #Joinin and each match will be given its own hashtag.

“We aim to provide an all-round digital companion so that billions of fans can join in and share their excitement,” said Walter De Gregorio, FIFA Director of Communications and Public Affairs.

In other World Cup social media news, sports shoe manufacturer Adidas has just launched its social media and marketing campaign for the tournament. The multinational’s approach is unusual and goes against the grain of current social media marketing trends.

Football fans are being invited to be “all in” or “nothing” during the massive football tournament. Those that opt for “all in” will be signed up to all of the company’s World Cup content including all of their Twitter handles. Those who select “nothing” will be opted out of the coverage.

The campaign is being promoted by a YouTube video that’s received more than 30 million views and features some of the world’s biggest footballing names.

Tom Ramsden, Global Brand Marketing Director, Adidas Football, said: “This advert presents the “#allin or nothing” attitude by showcasing the dedication and commitment required to winning this great tournament.”

And staying with football, leading international communications company Ooredoo has created a global communication campaign with brand ambassador Leo Messi, one of the best footballer’s in the world. “Simply Do Wonders” encourages young people to upload videos of their football skills to an Instagram account with the hashtag #MeetMessi.

The best entries will be shared on Facebook and voted on. The winner will receive an all expensive paid trip to Barcelona, Spain to meet the player. One of the aims of this campaign is to demonstrate the link between the communications brand and Messi’s role at competitions such as the World Cup, one of the most viewed sporting events on the planet.

Winning teams will go forward to a Grand Finale event where they’ll battle it out to crack the full code. The prize is 50 Samsung GALAXY S5 phones. The campaign will run over five weeks and has been timed to coincide with the launch of the new Galaxy smartphone.

Come to Croatia
The Croatian National Tourist Board has launched a user-generated social media campaign, “Visit Croatia. Share Croatia”. Tourists are being invited to share their vacation memories on social media channels under hashtags #LoveCroatia and #ShareCroatia.

Images and videos will then be shared on a new website, sharecroatia.hr that was launched on June 1st. Those that attract the most votes by the end of September 2014 will be in with a chance of winning a vacation to the country.

Other exciting social media campaign news that’s caught our attention:
Axiom Telecom announced that its #axiomintervention campaign reached an audience of more than 21 million from March 2013 to May 2014. This included 21.3 million impressions on Twitter, 39,000 YouTube views more than 193,000 people on Facebook. The campaign promoted an interventions programme in the UAE and Saudi Arabia where consumers can trade in old mobile phones for new smartphones.

Twitter has added a neat little feature for the world cup, it is prompting existing users to choose their favorite team in the world cup. And from that you can pick a new avatar to help support your team and also lists all players, coaches and analysts that relate to your team so you can get the latest tweets from your favorite team.