Twitter is like that lesser-known artist, who may be a Beyonce in the making but way fewer people are interested. Yes, there are other advertising channels that are more popular than Twitter. But there’s still value to be tapped there. Twitter is arguably one of the best platforms for Ads still in 2020 and you’re going to need a guide to make the most out of it.

Twitter has excellent capabilities when it comes to ad targeting. It could be useful if you’re hoping to reach a certain demographic, for example. 80% of Twitter users are affluent millennials or in other words young people with spending power.

Furthermore, you can target users who have recently tweeted your keyword. Compare this with Facebook which only allows you to target topics.

And if you still aren’t convinced, the bottom line is that Twitter ads perform well. They see a 50% increase in ad engagements and a 14% decrease in cost-per-engagement year on year.

Manage your Twitter Ads and Social Media in one place!
Request a Free Business Plan Demo

Now, here’s your complete guide to mastering Twitter ads in 2020:

Generally, Twitter ads have a good click-through rate. The average CTR is 1-3%, compared to the meader 0.119% of Facebook ads, but click-through rates, engagement rates, and so on aren’t guaranteed – you still need to know what type of Twitter ad to use to get the most out of your campaign.

These are displayed at the top of search results and live feeds, and may look something like this: With promoted tweets, you can expand your reach by getting your tweets in front of users who don’t already follow you. So, use them when you want to spread an important message…

For example, when you have an upcoming event, a new blog post, an important announcement, etc. The whole point of this is to get more followers from your target audience. By increasing your followership, you also increase brand engagement. Thus, you may wish to use promoted accounts if your goal is to grow your customer base.

This puts a topic or hashtag of your choosing at the top of the trends list. The purpose is to get as many people as possible talking about your campaign. It also increases the organic reach of your hashtag as people start to use it themselves.

It’s an expensive option, so you should use promoted trends to advertise a major campaign.

You may also wish to use this option to overtake competitors during a key period within your industry e.g. to capitalize on seasonal shopping.

Video ads are all over social media platforms these days, so it’s crucial to learn about them if you’re really going to dominate Twitter ads with this guide.

How do they work?

There are two types of video ads you can use on Twitter, in-stream video ads, and promoted video views campaigns. Your in-stream promoted video appears at the beginning of one of Twitter’s content partner’s vids. Twitter matches your brand to the most appropriate partner, which might be a news outlet, sports team, TV network, etc. This is an automated service, for which you pay a flat fee of $99 per month. Your first ten tweets of the day are automatically promoted to your target audience. There are several reasons why you may choose this option, such as time constraints. Or perhaps, you’re new to Twitter advertising and unsure about how to manage your ad spend.

Though promote mode can be highly beneficial in certain circumstances, we’d favor choosing one of the manual options. This gives you greater control over ads, allowing you to pinpoint and work towards objectives…

Twitter ads help expand your social reach and following. Soon, thousands of new people will discover your tweets. What’s more, those people will comprise your carefully chosen target audience. It’s safe to say you don’t want to go shooting in the dark here. You want to get this right and create an effective ad campaign.

So, here’s your step-by-step guide to setting up your Twitter ads promoted tweets:

First, decide exactly what you want to achieve with your promoted tweets and this will depend on your campaign objective. What do they mean?

This objective will push your promoted audience to view your video content or GIFs, so your promotion will boost your view count, as well as being seen by more people.

Selecting this objective will focus on the number of people either following a link in your Tweet or make a download or purchase (a conversion). This objective allows you to track conversions/sales from your Twitter Ad, and you will be charged per click through your website.

Your video will be played as an advert on another account’s tweeted video content, as in the example below. The accounts that are able to host video ads on their tweeted content are partnered with Twitter and therefore you don’t need to worry about your ads appearing on controversial or offensive content. Your video ad is also matched by Twitter to a relevant account. 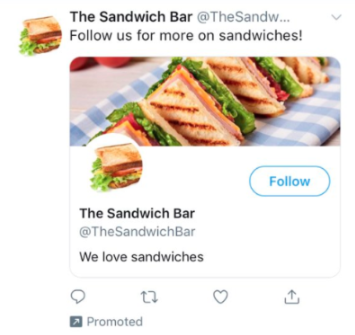 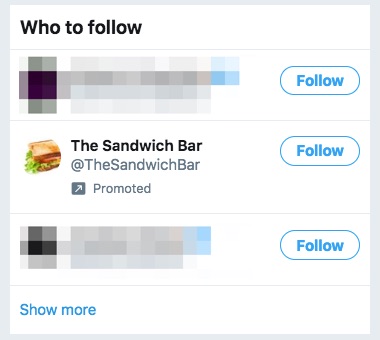 If you have an app that you’re wanting to encourage people to download, you can use this objective. It will appear on the target audience’s newsfeed and encourage users to download, using direct links to your app on the Google Play or Apple’s App Store.

This objective will target Twitter accounts of people who have already downloaded your app, and persuade them to open the app again directly from their timelines. You can split your campaign into multiple ad groups, which could be beneficial in several ways. For instance, you could test out different budgets or placements to see what gets the most engagements. Or you could segment your audience and target different groups.

At this point you also have the option to set a maximum cost-per-engagement or choose automatic bidding: “Automatic bid” is the simplest option as it optimizes your bid for the best results at the lowest price.

Here’s where things start to get a little more interesting…

You can target your audience based on many factors.

First, there are basic demographics, including age, gender, location, and technology. The cool thing about the location section is that you can narrow it down to a specific region or go as broad as a whole country:

In the next section, you can get into the nitty-gritty and target your audience based on behaviors, characteristics and keywords: This section also has some new options Twitter has added in order to compete with the likes of Facebook’s Custom Audiences. You can retarget users who have seen or engaged with your previous tweets:

Furthermore, you can set the level of audience expansion to include those with similar characteristics to those you have chosen:

Overall, you have the ability to set up a niche target audience here to reach those most likely to engage with your ads.

5. Select Your Ad Creative and Placement

Now you can choose the tweets you wish to promote from your existing list of tweets or create a brand new tweet for your campaign.

Note that you can add video, images, polls, and cards easily by clicking on the buttons below the tweet box: Different objectives come with different ad placements. But you can select your placement from the list associated with your objective: Then you are ready to launch your campaign. Promoted tweets are relatively simple to set up once you understand the steps.

All that’s left to do is experiment with your chosen parameters to see what works best for your Twitter ad campaigns.

Manage all of your social media in one place... and your ads too!
Request a Free Business Plan Demo

Which Tweets Should I Promote?

Choosing the right Tweets to promote can make-or-break your campaign. For example, sales-y tweets will make people unfollow you quicker than you can say “Spamalot”. But don’t despair! We’ll guide you through selecting the perfect Tweets for your Twitter ads campaigns.

Nishat Mehta writes at Forbes, “As advertising and ad measurement become more sophisticated, two things are certain: New technologies and channels are bombarding consumers with messaging, and consumers have become frustrated with advertising that they find irrelevant, disruptive and annoying.”

The answer is: You should not try to sell to your audience straight away. Instead, attract them to your site by promoting high-quality content. Once you grab them with your engaging content, they enter your sales funnel. So, you might promote a tweet that links to a lead magnet, for example, an ebook or webinar. If you’re working with a B2C, it’s unlikely that you’re going to release an ebook anytime soon. In this case, you might share an engaging blog or video content.

Alternatively, you could go for more of a soft sell. A discount offer or free trial is more appealing to users as they aren’t required to make too much of a commitment.

Check out this example: Spammy, hard sells are to be avoided when deciding which of your tweets to promote.

All in all, you shouldn’t brush Twitter ads aside when figuring out your social media strategy. They have some awesome features, which are good enough to compete with other, more popular platforms. Use the right type of Twitter ads to maximize your ROI… and follow the simple step-by-step Twitter Ads guide above to create perfect promoted tweets!

Now it’s over to you to set up your Twitter ads account and get cracking, but you can always refer back to our guide any time you need!

Kelly is a Content Creator/Marketer for SaaS and B2B brands, and the Founder of Copy Goals. Her work has been featured on the likes of CoSchedule, JeffBullas.com and more.