Ever since Facebook grew to a staggering 21 million in Japan, it has left competitors in a daze and cynics having to eat their words? Experts may cite a variety of reasons for this development, but it doesn’t do much to ease the strife that local giant Mixi is being subjected to.

Until recently, Mixi in Japan was the dominant and prominent site that ruled the social networking scene. However, its popularity is being eclipsed by Facebook. 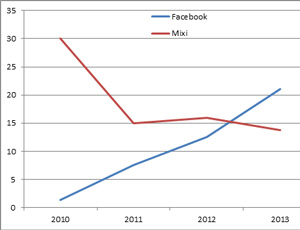 Why was Mixi Popular?
Mixi debuted in Japan nearly a decade ago and still holds some place in the charts, going by the records that Facebook has broken on the world stage. With features that suited Japanese ‘sensibility’, the Kenji Kasahara invention has been in-vogue ever since its launch.

It, however, is very significant if one is to deduce the archetypal craze for technology among the Japanese population. It is fairly unobtrusive and feeds off on the traditional shyness of the internet using population in the country.

Initially, the site was often used anonymously as is with gaming portal DeNA, which moderates any revealing of identity or contact details. The reasons for Mixi becoming the fad that it has been are not few.

The feature that allows users to know who all have visited their profiles has contributed massively to the reservation and security seeped in the Japanese social networking culture. The website recorded more than 20 million users before the bygone couple of years.

Downslide for Mixi in Japan: Facebook Finally Arrives
The factors that denied Facebook its current position have been exactly those that have put it at the top. Until now, users complained it was intrusive, asking them to reveal actual identities and other details.

However, the barrage of a few natural calamities and globalization are being held responsible for the recent love that the Japanese are feeling for Facebook. Meanwhile, popular high-profile users are increasingly setting base on Facebook. 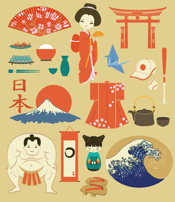 The developments are also a result of the highly successful biopic on its founder. It is nothing more than a ripple effect that Facebook is gaining from and Mixi is seething from.

There have also been speculations that the Japanese have of late felt a strong need to get in contact with people from the non-orient and mingle with populations away from the Asia-Pacific. Add to this the cleanest possible image that the world leader has, and you know exactly why Facebook is suddenly this big in Nippon.

The Upcoming Social Networking Sites Scene
It is not for nothing that Facebook has been the rage it is in Japan. Versus Mixi, it has upgraded to suit the life and times of the Japanese internet using public better. Mixi’s stock price has fallen by 38% in the past year.

However, it is being assured that there is little reason for worry. Twitter has recently joined hands with the Japanese social networking giant to do joint marketing. Speculation is rife that Twitter and Mixi are jointly bent on taking on Facebook here. By the means of this mutually benefiting relationship, both Twitter and Facebook, are looking at unattended fields of development. 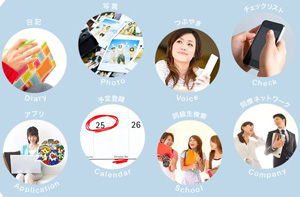 Mixi in Japan is expecting to integrate public information better into its closely knit communities. The recent developments also include the handing over of the reins of Mixi to the relatively new CEO Yusuke Asakura, and the subsequent launch of a couple of mobile-first startup ventures.

These are CloudStudy and Reventive, and with prospects that look promising, Mixi is looking to venture beyond its comfort zone. Whatever be the outcome, Twitter Japan country manager James Kondo is optimistic about the social networking scene in Japan and a better position for Mixi here.