As we all now know just because you post something on Facebook doesn’t mean the majority of your friends or followers will see it. Facebook uses a complex algorithm to determine what is relevant to a user and what isn’t. If Facebook deems your content irrelevant to a user, for whatever reason, it is highly unlikely that your posts will show up in that user’s newsfeed. We will cover some tips in this post to optimize and increase the visibility of your facebook posts.

This can be incredibly problematic, especially if Facebook thinks your content not relevant to large swaths of your friends or followers. It wreaks havoc on visibility and subsequently significantly mitigates consumer engagement, which in turn even further drives down your visibility in a vicious cycle.

Believe it or not, engagement is one of the most important factors in Facebook’s allusive ranking algorithms. So the more people interact with your content the more they (and their own social networks) will see your brand’s content. To foster engagement and ensure that your Facebook content is visibility be sure to take a look at the following steps, these apply equally regardless of whether you are positing organically or paying for your content to be seen:

1. Post at the right times. The bottom line is that it absolutely does matter when you post on Facebook. Users can engage with your content if they aren’t tuned into Facebook. Some times are just better than others when it comes to posting. After all, how many people do you know that are checking their Facebook accounts regularly at 3am? Probably not that many. Facebook usage peaks at certain times of the day. In general it behooves a brand to post at one of the following peak time intervals: 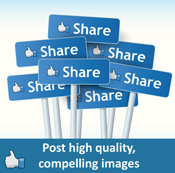 2. Post high quality, compelling images. People like pictures. Visually driven content is one of today’s biggest social media marketing trends; currently, roughly 63% of social media content is visually powered and this number will likely only continue to grow. Research consistently shows that the human brain processes visual content much faster than text so pictures are a great way to grab follower’s attention and drive up engagement with better visibility of your facebook posts.

3. Encourage consumer action and response. If you want consumers to respond to and engage with your content you need to give them something to respond to. For example, a beautiful photograph of a Caribbean beach with the caption, “what’s your favorite beach vacation spot?” offers much more opportunity for response than just the photograph itself. Also, it is important to note here that incentives can greatly boost consumer action, significantly boosting fan conversion rate. To get people to like your page or comment on a post try offering an incentive. Remember, people are more likely to act when there is a potential reward for their action.

5. Stay on topic. If customers like your brand’s Facebook page they most likely expect the content you post to be at least somewhat related to your industry or niche. If you are tech start-up it might not make the most sense to post a baby formula recommendation. Remember it is just as easy to un-like a page as it is to like a page. If customers see a post that they find bizarre, offensive, or wildly off-topic they may very well give you the boot.