With the plethora of imaginative content across social media channels every day, brands are creating ever more exciting campaigns to grab attention. They are making the most of all the tools at their disposal, including videos, images and user-generated content. We see these hallmarks in some of the campaign launches during the last few days.

In the news section, of this article, there is plenty of evidence of how social media is playing an increasingly important role in shopping, influencing product discovery and purchase decisions.

So without further ado, here’s our selection of some of the latest and most fascinating campaigns:

Lenovo, the Chinese multinational computer technology company has a holiday themed social media campaign that is capitalising on the popularity of selfies. Under the hashtag #Holiday360, members of the public are invited to submit a selfie video that shows how they are celebrating the festivities in their hometown. Videos can be submitted to Facebook, Twitter or Instagram, and Lenovo will curate them to create “the world’s first global 360° selfie”.

Lenovo Director Rod Strother said: “We’ve found that our community enjoy sharing their own content with us, and as such, campaigns like this where fans are empowered and can express their creativity generate high levels of participation and engagement.”

And there is the video that launched the campaign, showing followers how to take their 360-degree videos

As part of its festive Christmas marketing campaign, Ferrero Rocher China has launched a multichannel initiative that allows visitors to personalize, share and send a virtual Christmas greeting along with a box of chocolates. Customised greetings can be sent by email on the chocolate brand’s website or via its social media sites such as Wechat and Weibo. Participants who send a virtual gift will be in line for a festive prize, a box of premium Ferrero Rocher chocolates.

To try and reach younger consumers, car giant BMW has embarked on a Snapchat-inspired social media campaign and 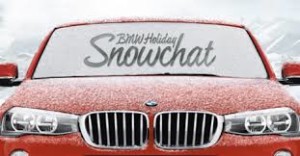 website dubbed Snowchat. The imaginative project takes its lead from the hugely popular photo messaging Snapchat app where users set a time limit for how long recipients can view their Snaps.

The BMW version features the new BMW X4 which has been designed with the younger driver in mind. On Snowchat, users wipe away the windshield to write messages and draw shapes. The artwork can then be shared across social media channels. Upon opening, the messages will disappear after 5 seconds.

“We are trying to open our arms wider than just car enthusiasts and BMW fans,” said Paul Renner, executive creative director at Kirshenbaum Bond Seneca, the agency that created the campaign for BMW. “We’re trying to invite people into the brand and let us be a part of their daily lives for the holidays.”

Getting Creative in the Bath

Lush’s latest marketing campaign was inspired by its social media followers. The cosmetics company has published a video backed by an orchestral score that shows the swirling colours created when their bath products hit and dissolve in the water. Lush said that part of the motivation came after seeing posts from their fans who had shared their bath art images under the hashtag #lushtime.

Nikon Turns to Social to Show off its New Camera

What better way to demonstrate the features of your company’s new camera than with an entertaining social media video? To show prospective consumers just what its Nikon D750 DSLR FX camera can do, Nikon brought in JWT Singapore to create the ‘Breaking Free’ online campaign. The 5-minute video, which features on Nikon’s YouTube channel lets viewers watch a group of Korean breakdancers from nine different perspectives taken by the new camera.

“With the explosion of great online content and the ability for anyone to express themselves more freely today, we wanted to demonstrate how this camera could empower and inspire people to do more. By putting it in the hands of these dancers, the result was both illustrative and entertaining,” commented Jared Kang, Senior Art Director of JWT Singapore.

Social media contests are all the rage, and Yamaha Music is tapping into their popularity with a photo contest to promote its 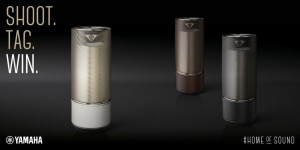 audio devices. Consumers who upload a picture of a room inspired by their ‘Home of Sound’ range will be in with a chance of winning a Yamaha LSX-70 Relit. The products will be given to 12 winners selected from those who upload images to Pinterest, Instagram or Twitter using the hashtag #homeOfSound. One winner will be announced each day of the campaign.

A quick look at some of this week’s most interesting social media news stories:

Mobile Trends among Travellers in JAPAC

According to a study by AdNear titled ‘JAPAC Traveller Report 2014’, homemakers travelling through Changi Airport are the most connected mobile users. The report is exploring trends in the JAPAC region and found that homemakers are five times more switched on to their mobile devices as against professionals. Travellers in the 25-36 age group showed the highest engagement at 69%.

Gift maker Mud Pie has come up with a good way to promote its brand across social media and at the same time provide expert content for its followers. Five bloggers are collaborating with the company via its online ambassador program. Through their posts, they will share information about industry trends and other relevant news as well as encourage their followers to consider Mud Pie’s product offerings.

“We’re leveraging the power and insights of these astute blog partners to help retailers identify emerging trends and inform consumers about where they can find these imaginative products,” said Fred Pannek, president of Mud Pie.