The Macy’s department store is a force to be reckoned with when it comes to social media. With 13,659,285 likes, 270,941 talking about the page and 613,070 check-ins, they wield a heavy social influence in the retail space. Not surprisingly, Macy’s is a brand that is definitely doing the Holidays right.

Macy’s overarching Holiday campaign is called BELIEVE. Each Macy’s store has its own postal box where children can send their wish list letters to Santa.

The social media pages are asking their fans to tag images of the children delivering their letters with the hashtag #MacysBelieve. Macy’s also partnered with  Make-A-Wish America on social media, declaring that if they reach 1 million letters to Santa, Macy’s will make a 1 million dollar donation to the charity! 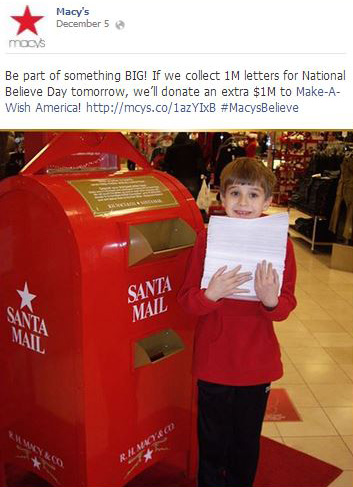 Notice that Macy’s social media made sure to shortlink the URLs in the Facebook post. MavSocial has automatic link shrinking to make your job easy. If you are not a MavSocial user, you could use a free service that shortens links. To match the social theme, Macy’s also changed their Facebook Timeline cover photo. The Timeline Cover Photo sets the tone with their Christmas décor, for the entire page and gives the digital page a similar feeling you might get while walking into a physical location…

We are excited to watch what Macy’s does as we get closer and closer to the holidays. Do you think they will reach their 1 million letter goal?