The global athletic apparel giant, Nike, has always done things their way. Since launching in 1964 out of the backseat of founder Phil Knight’s car after track meets, #Nike has been doing things in interesting ways in every aspect of their business. We were curious how Nike Social Media (who has 2.4 million Twitter followers) were celebrating the Holidays on Twitter. 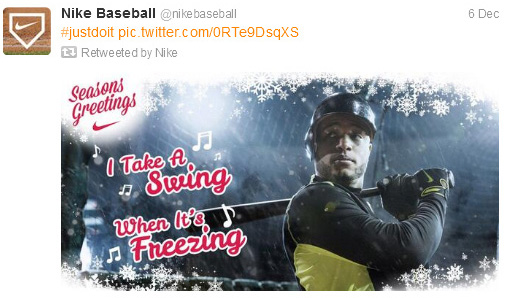 From December 6th to December 8th, the only Tweets that Nike posted were retweets of either their sponsored athletes, sponsored teams and schools, or sister Nike affiliated accounts.

Each of these retweets originated from the sport’s celebrity or team’s Twitter and included a branded Holiday image (assumingly created by Nike) that contained the Nike branding and an inspirational line of text that relates to the Twitter in question.

For MavSocial users, this can be done quite easily with a combination of our BigStock library and a little photo editing work. If you do not have MavSocial, you can give it a try free now here. 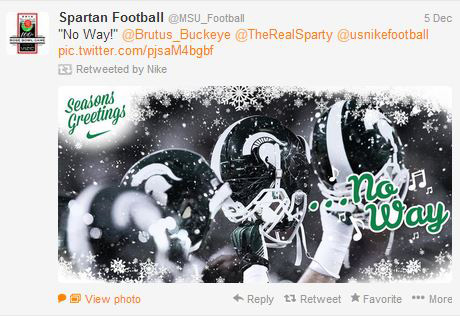 For Nike social media, this was a great strategy for 3 reasons: 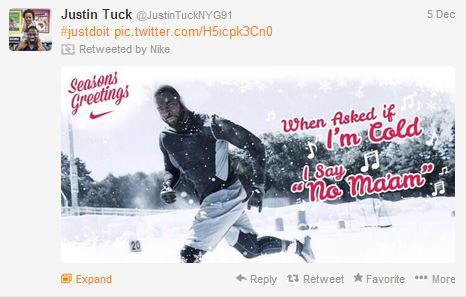 The obvious question the average marketer might ask is Why can I learn from Nike? They have millions of dollars to hire celebs and get the branding perfect.

Most of what Nike did right in this campaign was free – take away the sponsored athletes and you can be inspired by the cohesion that existed among the brands.

If you run the marketing for a small business, you could do the same thing by just having your employees tweet branded Holiday images that relate to their personality or job title.

We hope this inspires you to create a Holiday Twitter campaign that dares to think differently.