Social media has turned customer service on its head, radically changing the way people look to companies for help. The days of customers calling up a business to complain are disappearing fast. Nobody wants to spend an hour being sent round a phone system, having to explain a problem multiple times before finally being put through to the one person who can actually help them. Learn in this post how you can use social media to manage customer service.

These days, customers expect brands to be socially responsive. There’s no faking it anymore as everything is conducted out in the open for the world to see.

Get it right and not only will you keep your customers, but you’ll pick up some more as happy and contented souls will inform their social networks about their wonderful experiences with you. Get it wrong and an aggrieved customer now has dozens of ways to instantly tell their friends about their mistreatment, as well as thousands of people they have never met.

Brand Loyalty
Customer service is a key determinant of brand loyalty. According to the 2014 Avaya Asia Pacific Customer Experience Index, 83% of consumers avoid buying from a company and tell their friends and family members to follow suit if they experienced bad customer service. And 75% preferred customer service support across multiple channels.

Although the majority of customer-company interactions are still in-person (62%) and by phone (75%), adoption of social media for customer service is on the rise. In Thailand it accounts for 54% of interactions and in Indonesia its 40%. In Singapore, nearly a third of survey respondents said they use Facebook to contact an organization.

In Australia, more than 70% of businesses are using social media for customer service. And most of the time they are getting it right. A 2013 study by Social Pulse and Online Circle Digital revealed that the companies it surveyed responded to posts nearly 85% of the time, with an average delay of 26 minutes.

The results across industries are:

If you are wondering how to give good customer service via social media, here are four examples of companies that are doing it oh so right:

Jetstar – the low-cost Australian airline uses a social media management system to keep across its multiple multilingual social media profiles. Four departments use it to deal with issues and track brand mentions and conversations online. They are the marketing team, customer care team, the human resources team and the corporate communications team. All can manage customer service with consumers via social media, but only the customer care team does so on a full-time basis.

Jetstar has Twitter lists and keyword and hashtag search streams to monitor and engage directly with customers. Keeping on top of their social media activity allows Jetstar to listen to and connect with customers and potential customers, ensuring their messages aren’t overlooked.

Tesco – according to research by Socially Devoted, the British supermarket chain Tesco is one of the top UK brands for customer service on Twitter. In March 2014, its hilarious response to one customer complaint went viral.  The customer complained on Twitter that the garlic he had bought from a Tesco store was mouldy. Part of his tweet read: “How am I supposed to fight off vampires now?” 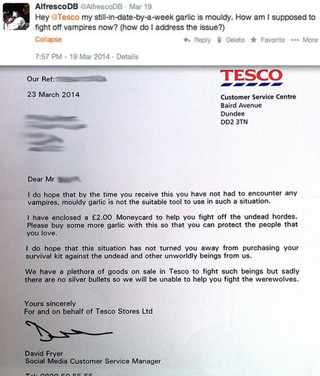 In response, the supermarket sent him a letter that stated: “I do hope that by the time you receive this you have not had to encounter any vampires, mouldy garlic is not the suitable tool to use in such a situation.” The store provided him with a money card loaded with £2 so that he could “buy some more garlic” to “protect the people that you love.”

Delta Airlines – this is a great example of swift and helpful social media customer service by the major American airline. Social media strategist Jessica Gioglio was concerned she would miss a flight connection to New York because of an international flight delay. So she called the customer helpline and was promptly held in a queue. So she decided to tweet the customer service team at @DeltaAssist.

One minute later, she received a reply. It asked her to private message them with her confirmation number so they could rebook her on another flight. Eleven minutes after that she received seat confirmation on the flight of her choice. All the while, she was still on hold on the phone and hadn’t yet spoken to a live person. 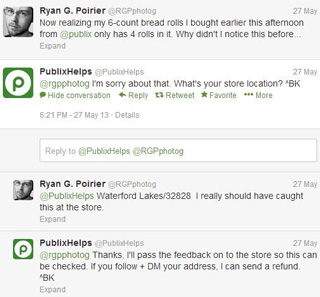 Publix – the American supermarket chain Publix is a shining example of how to give great customer service via social media. The company has a team of social media specialists that respond to fans and followers 12 hours a day, seven days a week. They reply to the good, the bad and even the downright ugly with genuine messages not canned, corporate responses. They use their real names and answer questions, deal with issues and respond to praise.

On Twitter, Publix has a main account and the @PublixHelps account, a dedicated customer service line. Questions are dealt with promptly and fully as this great example demonstrates:

Don’t Get Left Behind
Companies must wise up to social media customer service. Customers are no longer prepared to call up phone line or write emails or letters to complain. Not when they can write on your Facebook and Twitter page, alerting thousands of people to the problems.

It is in everyone’s interest to deal with these issues as quickly as possible. Doing so not only keeps the customers happy, but it acts as fantastic word of mouth PR. Businesses that don’t understand this will find they are left behind.