Many companies and organisations have hit their social media stride and are launching confident, imaginative and engaging social media campaigns.  In this week’s look at some of the latest social media happenings, we see a movie company’s striking use of imagery and interactivity and how one financial corporation has turned to Vine for some Halloween fun.  The news section leads with an interesting story on the social media behaviour of travellers in the Asia Pacific region.

To get the word out about creature feature Exists, Lionsgate and Digital Media Management have combined forces to launch a fun social media campaign on Tumblr.  Users are able to interact with some of the movie’s characters and determine the direction a particular story takes.  Every choice that fans make during their online quest will reveal new content such as videos and GIFs which can all be shared with their own network of followers.

The movie was released last Friday and is from the director of The Blair Witch Project.  The story follows a group of friends who are holding a party in a remote Texas woods, but find themselves being stalked by Bigfoot. 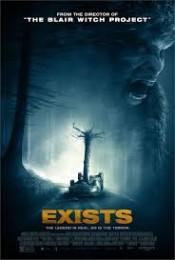 The social media adventure experience immerses users into the story and their choices determine their fate.

Exists is one of a number of recent movies that have taken to social media in imaginative ways.  They include the Idris Elba thriller No Good Deed.  That campaign challenges users to outwit one of the main characters, the escaped killer Colin Evans, played by Elba.

It appears that filmmakers and their publicity folk are upping the ante when it comes to marketing their films through social media.

Adam Reynolds, VP at Digital Media Management had this to say about the Exists campaign on Tumblr: “We partner with studios and networks to engage consumers in innovative ways on social media. Tumblr continues to be a limitless platform, and we’re constantly discovering new ways to entertain users and tell interesting stories.”

The take part in the Exists Tumblr adventure, click here.

Columbus Wants Residents to Discover the Benefits of Spending Locally

Officials with the Columbus (County) Chamber of Commerce and Tourism have embarked on a new social media campaign to encourage Columbus citizens to spend more money in the local community.  The chamber hopes to change the mind-set of people who go to some of the nearby locales such as Wilmington or Fayetteville where they think they can get a deal.  The campaign features a five-minute YouTube video where an actor playing the explorer Christopher Columbus explains why Columbus County is his favourite place in the world.  Since it was published on October 20, it has received more than 1,000 views.

“The more money we spend in our community, the more money we will have circulating in our local economy, and that way we grow and everyone wins,” says Columbus in the video.

Residents are being encouraged to spread the message about spending locally via the hashtag #KeepItColumbus.  In so doing, they will be in line for prizes and gift certificates from local businesses.

We are coming up to the spookiest day of the year, Halloween. This is a fantastic time for brands to get their creative cogs turning faster than a werewolf running through a forest.  And they don’t even have to set up a new campaign, because an already existing one can just be tweaked a little.  For example, the Capital One Financial Corporation has created a Vine video with a spellbinding tip on how to preserve pumpkins.  It’s part of their “Halloween Hacks” campaign which also nods to the financial firm’s long-running marketing program for its Quicksilver card.  This also uses the “hack” theme.

Not only is the Halloween campaign a bit of fun that entertains the audience, but it is also relevant to its core promotional drive for the card.  In other words, it doesn’t feel like a bolt-on promotional wheeze that would stick out like a fair maiden in a room full of vampires.

A roundup of some of the most prominent social media stories of the last week.

Accor Hotels has carried out a survey of more than 6,500 travellers from the Asia Pacific region to learn about their social media behaviour. The results of Accor’s second Social Media Monitor make interesting reading.  Some of the key findings are:

“This survey provides great insight into where our guests are looking for inspiration for their travels, how they engage with social media during their stay and how they share their experiences afterwards,” said Jens Uwe Parkitny, Accor’s vice president digital marketing & distribution.  “We can then use this information to meet their needs at each stage of the customer’s journey.”

WABCO, a global supplier of technologies and control systems for commercial vehicles has announced the winners of its My Truck Stop campaign,

a global social media contest.  Truck drivers and other members of the commercial global vehicle community were invited to post photos of their favourite truck stops, via Twitter, Instagram and Facebook.  They used the hashtag #MyTruckStop and included images of their daily lives in relation to truck stops.  All submissions were entered into a prize draw and five winners were awarded iPad minis.  The winning pictures can be seen here.

“We were amazed by the levels of response and diversity of images that we received,” commented Nick Rens, President, Trailer, Aftermarket and Off-Highway Division at WABCO. “From the hustle and bustle of Japan, to a back drop of the New York skyline, it was great to see drivers giving us real insights into their lives on the road.”