Well, it’s been another exciting week in the world of social media, with the rolling out of a slew of inventive campaigns. They highlight the potential of social channels to really get your message out there in a fun and engaging way. One of the most eye-catching could win your LinkedIn account some top Hollywood backing.

Movie Star will endorse Your “Special Set of Skills” on LinkedIn

Here’s something you don’t see very often, a social media campaign on LinkedIn. The film studio 20th Century Fox is promoting Taken 3 starring Liam Neeson with a very clever campaign that has the business-oriented social network at its heart. It kicked off with a YouTube video where the actor in character as Bryan Mills references his very famous “I will find you and I will kill you” speech from the original Taken.

He urges viewers to go to a special Taken 3 LinkedIn page where they must follow a set of instructions exactly. In short, they will be entering into a contest. For the winner, who will be drawn at random, Neeson promises that he will, “find your LinkedIn profile, review it and record a video of myself endorsing your particular set of skills”.

What a wonderfully creative and fun way to generate a buzz about a movie and give away a prize that costs next to nothing, but that many, many people will want.

Social Media Campaign to Give Oscars TV Show a Boost 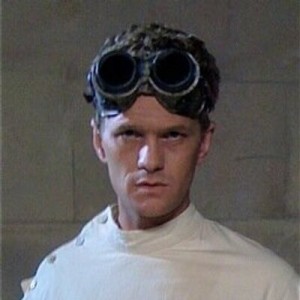 Academy of Motion Picture Arts and Sciences is getting ready to launch a $5.5 million marketing plan to publicize the February 22 televisual feast. The promotional activities will include advertising on such social media sites as Facebook, Instagram and Twitter. This year’s host is actor, writer and producer Neil Patrick Harris. The star has almost 13 million Twitter followers, so expect a lot of tweets, pictures and fun on his account.

Travel the World via Tulsa

Tulsa International Airport is ramping up its marketing efforts through a new social media campaign. The ‘Fly Tulsa, Vacations Start Here” initiative features a replica of the landmark Tulsa Diller statue that’s seen at the Tulsa City Fairgrounds. Passengers are being asked to take a photo of themselves appearing next to the figure and post it to social media accounts using the hashtag #FlyTulsa. The airline’s bosses hope the message will spread far and wide that people can travel anywhere in the world from Tulsa. The airport connects to many of the USA’s major international airport hubs.

Keep Fit in the New Year with Social Media Campaign

Halfords, a UK-based retailer of car and bicycle parts has launched a social media campaign on Facebook to encourage people to become fitter. The exercise plan is called #31FitterDays and was designed by a top personal trainer and nutritionist. The campaign involves weekly videos full of tips, as well as different exercises to perform each day. Participants can sign up to the beginner or intermediate level fitness plan.

Aldi wants Consumers to Spread the Love about Money Savings 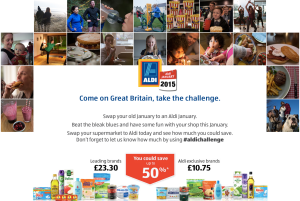 Marketing director Adam Zavalis of Weber Shandwick and Clarion Communications, who created the campaign, said: “Our microsite asks users how much they save each week and this functionality allows the user to track their savings. If a user hasn’t shopped this week, we wouldn’t expect them to enter their email address or saving, and there’s no requirement for a user to do so in order to view the rest of the website.”

The Kane County Cougars, a minor league baseball team in the USA has turned one of its news stories into a neat 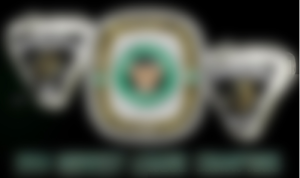 little social media campaign. It is centred on the team’s ring design which commemorates the 2014 Midwest League Champion squad. A blurred image of the ring was posted on its social channels which was gradually unveiled the more Facebook likes and shares and Twitter re-tweets it received. Followers who took part were entered into a draw for such prizes as game tickets, ceremonial first pitches and autographed baseballs.

Let’s take a look at some of the standout social media stories of the last few days.

The New Year is, of course, the time for predictions and Business 2 Community has been staring into its crystal ball to predict the five trends that will shape the B2B digital marketing landscape in Asia Pacific during 2015. They are:

Reinforcing some of the above, were a few recent statistics highlighted in an article in Singapore Business that are worthy of note. Close to 50% of the planet’s population is now connected to the internet and the number of connected devices is expected to rise to 26 billion by 2020. In Singapore, mobile networking is experiencing a phenomenal rise. Nearly half of the country’s population logs onto social media via a mobile phone.