New Zealand and Social Media
Social media is part of the fabric of everyday life in New Zealand as more people are turning to social networks to engage with friends, family and consumer brands.

Social media NZ #socialmedia is becoming an ever bigger part of the conversation in NZ with more than half of the country’s 4.5 million population using social networks. The biggest societal shift since the Industrial Revolution has been made possible by the steady increase in the use of information and communications technology. 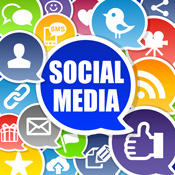 In the latest figures provided by comScore MMX, 2.8 million people accessed a social media site in NZ during November 2013. The most popular network with 1.95 million monthly unique visitors was Facebook #Facebook, more than double that of LinkedIn #LinkedIn, which came in second place.

The Top 5 Social Media Sites in New Zealand are:

Looking more closely at the demographic profiles of these sites, LinkedIn attracted a large share of the older population. Two thirds of users are over the age of 35 while Tumblr was popular with the younger audience as more than half of users are under the age of 35.

In recent years social media has woven itself into the fabric of everyday life, a mainstream form of entertainment #entertainment and interaction. But it’s more than just a way for people to connect with friends, watch hilarious movies and share pictures of key events in their lives.

Savvy #savvy consumers also turn to Facebook, Pinterest, Twitter et al to save money, hook up with their favourite brands and learn about products and services that will make life easier. In fact, no less than 42% of New Zealanders are now interacting with companies via social media.

The most popular reasons #reasons are for competitions, special offers, promotions and to receive information about a brand. The other motivations include giving brands input and accessing their content. New Zealand businesses can no longer afford to avoid the digital sphere.

One New Zealand company knows this only too well and has long realised the potential of social media for success #success. Air New Zealand, the country’s national airline may well be a favourite with kiwis, but it’s a small player in the global market.

So the company has been turning to social media to punch above its weight and grab a slice of the international consumer base. The company’s social media activity has included a series of highly entertaining #entertaining videos that have scored millions of hits.

The hilarious #hilarious “Fit to Fly” video with keep-fit guru Richard Simmons was a huge hit that made more 100 million media #media impressions in the UK and more than 300 million in the United States. This included coverage on the US’s four main television networks.

This is positive word of mouth #wordofmouth on a massive scale. The airline’s social activity rarely pushes products but what it does do is sell the brand’s personality to a worldwide audience.

When US rapper Snoop Dogg #SnoopDogg recorded a video with the airline’s puppet Rico, it spread around the internet like wildfire. A posting on Snoop Dogg’s own Facebook page reached more than 11 million fans and other celebrities mentioned it on their social networks. The video was also picked up by television news and the print and online media.

Paydays
In an increasingly competitive national and international market, there’s no respite from the battle to win consumer hearts, minds and purses. Social media in NZ is a way to forge ahead and generate increased exposure and more web traffic #webtraffic.

New Zealand’s population is turning to social networks to engage with brands in ever greater numbers; it’s up to those companies to keep them there and turn their ‘likes’ into paydays.