There aren’t too many shopping days left until Christmas, but we are still witnessing the launch of new festive social media campaigns among all the other promotional pushes.

One thing that this week’s collection of campaigns have in common is their use of strong visuals, either photographs, videos or both. Not only do they take advantage of the quality of the still and video cameras that people have in their phones and digital devices, but also the ease with which they can be uploaded to social networks and shared. So, without further ado, this week’s standout campaigns are: 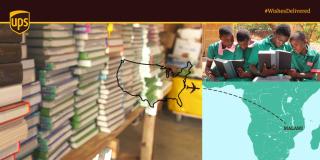 American public. The courier service is requesting its social media followers and customers to submit their wishes as a photo or message using the hashtag #WishesDelivered on Twitter. The wishes can be personal ones or for other people, organizations and causes. Among the wishes that have been granted so far include a 4-year-old boy being a UPS driver for a day and a $2,000 donation to the World Food programme. Furthermore, the company is donating $1 for each wish submitted, to one of three charities.

“There are so many incredible stories that we hear about during the holidays, and Your Wishes Delivered is a great way to collect and share them. We are excited for our customers to see these stories, see wishes realized and to allow UPS to make a difference in the lives of many during the holidays,” said Alan Gershenhorn, UPS chief commercial officer.

Attracting Workers and Residents with a Selfie Campaign

Quad Cities, four counties in northwest Illinois and South-eastern Iowa is generating some love for the area with a new social 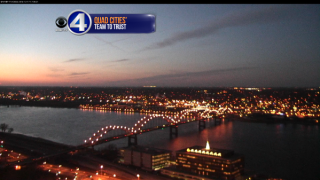 media selfie campaign. The initiative was launched by The Network: Young Professionals of the Quad-Cities under the hashtag #TagTheQC. “We’ve all seen the power social media has to spread a concept, and we’re harnessing some of that to build up community pride among residents,” commented Aiden Landman, The Network’s director. The plan is to get people to take a selfie in front of one of their favourite venues or locations, add it to their social media outlets and encourage their friends to do likewise. The social media project is part of a wider campaign to promote the region and attract more people.

Evian water has changed the design of its new bottles and wants to get the word out via social media. So it has teamed up with 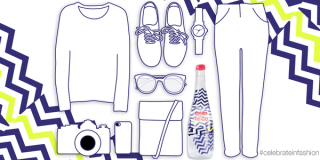 social media agency We Are Social to take advantage of the online fashion trend known as outfit grids. This is where people select items of clothing and accessories, lay them out in an ordered or more creative fashion and then share the image via social.

“Outfit grids are becoming increasingly commonplace in the fashion community,” said Raphael Turner, account director at We Are Social. “The campaign taps into this trend during the busy festive season, helping the fashion community consider the Evian Kenzo bottle as more than a drink – it’s a fashion statement.”

Evian is inviting consumers to post images of outfit grids that match the design of their bottles, using the Twitter hashtag #CelebrateInFashion. Winning images will be selected daily until December 22. To further support the initiative, posts will be promoted across Evian’s Twitter, Facebook and Pinterest pages to drive followers to participate in the Instagram part of the competition.

The Zayed Future Energy Prize has launched a social media campaign in Abu Dhabi to encourage people there to save energy. The awareness drive operates under the hashtag #YTurnItOff and is inviting young people to post 15-second videos on Instagram that offer advice and inspirational messages. Participants whose videos receive the most likes will be in line for prizes as will those judged the best by a panel of experts. They will base their adjudications on creativity, innovation and the practically of the proposals discussed in the videos.

“Water and energy are vital resources to our economy,” said Dr Sultan Al Jaber, Minister of State and director general of the Zayed Future Energy Prize. “To preserve them for the future we must cultivate an ethos of sustainability in the next generation, alerting them to their responsibility to care for the environment by taking simple, individual actions.”

Eyes down for some of the social media marketing stories that have been making the news during the last seven days.

Here’s some news about a successful social media campaign in the states. #HowToSantaFe was an awareness campaign to raise the profile of Santa Fe and the surrounding region. It involved contests, photo uploads and meet-ups with renowned Instagram photographers.

Some of the key results from the social media campaign are:

If you need more help tracking the success of your social media video campaign, Google as launched the Video Analytics Page in AdWords for Video. It comes with a slew of performance metrics to help marketers see and optimise what’s working. According to Google, the new tool will mean that users don’t have to search all over YouTube Analytics for that data. To get an idea of how it can work for you, click here.