Consumer Engagement and Cupid
Across the board, from drinks brands to airlines and retail chains, companies are rolling out a raft of Valentine’s Day-themed social media campaigns. 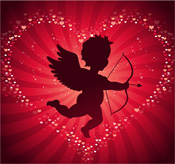 Cupid’s bow is quivering as the god of love #love prepares to send his arrows shooting toward the hearts of romantic couples #RomanticCouples all over the world.

When the planet gets all loved up big money is spent as Valentine’s Day #ValentinesDay is one of the biggest shopping dates on the calendar.

Playing Cupid #cupid with social media can earn your business some big love as the occasion is a wonderful opportunity to build online communities and increase your customer base.

Even if your products and services don’t scream romance #romance and seduction, your business can still benefit from Valentine’s-themed social media marketing. 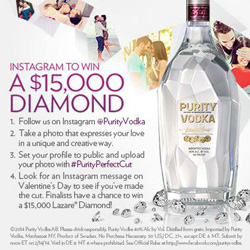 Purity Vodka is not a beverage that automatically speaks of love, but the brand has got into the spirit of things with a social-media based contest.

The ultra-premium vodka is asking couples to upload a photo to Instagram that captures their most romantic moments. The picture that receives the most votes will win a $15,000 Lazare diamond.

United Airlines also turned to the contest format for a campaign dubbed “Love is in the Air”. The promotion asked customers to send in their accounts of how the airline played a role in their love story.

The marketing copy accompanying the contest outlined the sort of things the airline wanted to hear: “Did cupid’s arrow strike you at the airport? Met the love of your life in flight? Popped the question at 30,000 feet?”

Entrants were encouraged to share their stories via the hashtag #unitedinlove across social media platforms. The contest closed on February 5 and the winner will be chosen by a panel of united employees and announced on February 14.

Love is in the Air
Love is in the air #loveisintheair and so is the scent of marketing opportunities, but your strategic use of social media doesn’t have to involve diving deeply into your pockets.

American multinational corporation Walmart has previously tapped into the romantic occasion with a number of simple measures such as changing their Twitter background and header image to feature love hearts.

To boost engagement levels the retail giant asked followers to tweet in their inspired gift ideas.

On Facebook, Walmart asked consumers to post Valentine’s Day dessert #ValentinesDayDessert creations to their wall. The recipe with the most votes was then featured as one of their meal solutions.

Social media and Valentine’s Day are both about nurturing relationships and any holiday occasion is an opportunity for businesses to engage customers and drive sales. 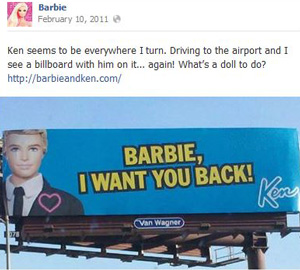 Toy company Mattel used Valentine’s Day to promote its Ken #ken and Barbie #barbie doll ranges. The ‘couple’ had ‘split’ in 2004 and many years after their ‘separation’ Mattel launched a Facebook campaign to reunite them.

Followers were encouraged to vote #vote on Facebook and Twitter as to whether they should get back together. Barbie’s Facebook page received several million likes, and as it also serves as a virtual store, sales went up as well.

Mattel also capitalized on this audience activity by launching a new product, the Barbie and Ken Gift set.

Businesses Heart Social Media
Social media offers some easy wins. Creative content and marketing campaigns based around themes such as Valentine’s Day gets businesses talked about.

The more fun and interesting the campaign, the more likely followers are to tell their networks and spread the love #SpreadTheLove. Increased visibility means increased traffic which can ultimately lead to more sales. Take advantage of social media marketing for Valentine’s Day!