Humans were using images to convey messages and tell stories long before the written word arrived on the scene. Whether painting on cave walls, drawing lines in the sand or carving on trees, our ancient ancestors knew the power of a good picture. Learn how to maximize your campaigns with social media pictures and videos.

Over time the medium may have changed, but the reasoning is the same, pictures are direct routes to the hearts and minds of others.

Since the birth of marketing, marketers have used images to attract attention, persuade and influence consumers and draw in revenue. And today on social media, visual content is making a massive impact.

This is why Facebook paid a billion dollars for Instagram, why Tumblr and Pinterest are among the fastest growing social media networks, and why YouTube is one of the world’s largest search engines which people utilize social media pictures and videos.

Visuals Increase Engagement
In its investigations, Curata saw that articles with photos earned more frequent clicks than those without.

A study by the content curation agency found there was a 47% increase in engagement in content with images than text only material.

In 2012, HubSpot conducted an experiment to see how photos affected Facebook engagement. Their data showed that images received 53% more likes than text-based posts.

Small wonder then that visual content is one of the hottest marketing trends. Nothing can add rocket fuel to your social media marketing campaign than great visuals. The right image or video can be worth much more than a thousand words and here’s why:

What this means for the small business owner 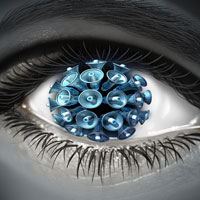 This is not the end of the road for text, not by any means.

Text-based marketing campaigns can easily generate favourable responses, but what it does signify is that your marketing efforts should include a healthy mix of visual content.

Far from playing a supporting role in a marketing campaign, images and videos are moving centre stage, creating eye-catching material that draws the attention of more eyeballs and increases participation.