Celebrities are among the biggest brands on social media. They have massive name recognition and fan loyalty. Some of the world’s most famous celebrities and their agents are masters at building up brands on the web.

Celebrities and social media are some of the most followed in the world.

When you look at the numbers to see which celebs are packing the most social media heat, they are more dazzling than a red carpet full of camera flashes.

By January 2014 Lady Gaga #ladygaga had more than 62 million Facebook followers, Justin Bieber #justinbieber had garnered more than 63 million and Miley Cyrus #mileycyrus had no fewer than 41 million.

Below are a few tips on how you can take your cue from the stars who get social media oh so right: 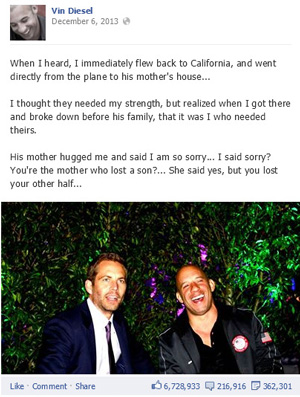 Provide a personal touch – they may inhabit a different universe from the rest of us, but celebrities are real people too. Many use their social media networks to show what they’re really like off camera.

Authenticity counts for a lot. Movie star Vin Diesel #vindiesel, famous for The Fast and Furious blockbuster franchise has developed a huge fan base on Facebook.

He writes extensively about his life, family and other celebrities and posts lots of behind the scenes pictures and videos. The Hollywood favourite will occasionally engage with fans by asking them questions and responding to comments.

One of the reasons Lady Gaga #ladygaga attracts a huge social media following is she lets her personality shine through. When she talks about music, fashion and her passion for social causes fans connect with her persona. She even once tweeted from her dressing room saying she could hear her fans screaming in the auditorium.

Pull back the curtain – Vin Diesel #vindiesel isn’t the only famous person who likes to break the aura of mystique that lingers around celebrities. Many others will share a dressing room photo, some green room gossip or a sound bite from the recording studio.

Fans go wild for this kind of material. Granted, what happens in your warehouse is hardly going to generate the same reaction, but consumers love to know about the real people and the real stories behind their favourite brands.

Come up with creative hashtags – hashtags are a neat way of earning some social media love by garnering a devoted group of followers. Take a look at how US chat show host Jimmy Fallon uses Twitter hashtags with his #latenighthashtags.

Fans are encouraged to join in some of the show-related mayhem with hashtags such as #myweirdteacher and #awkwardpromstory. Your company doesn’t have access to a late night audience of millions, but using a company name as a hashtag is unlikely to get your followers to share it. So get creative.

Don’t sell – the most social media savvy celebs do not over promote on Facebook, Twitter et al. Sure, they mention a forthcoming programme, film or concert but they don’t go into overdrive.