It’s no secret that social media in Asia is growing just as fast as nearly everything else. Asian countries vary in online restrictions – we know that North Korea is restricted to very little. Asian social networks are a prime spot to promote your business.

But even the more restrictive countries are easing, allowing citizens to join the social media world.

And Asian social media websites can be very beneficial to businesses because they are more innovative and easier to use, and they’re reaching a vast and diverse audience.

Asia has the highest population of any continent, with 4.3 billion people. 60% of the world’s population lives in Asia, and all but Japan and Kazakhstan’s populations are expected to keep growing.

And the more developed Pacific Asian countries and regions of China, Japan, Singapore and Hong Kong are among the world’s biggest business competitors.

It isn’t the biggest total amount, but it is the biggest relative one. Europe grew by 393%, and North America by 153%. In 2000, Asia already had the highest total users, by 9 million. Now, they’re the biggest by 559 million.

Users are getting connected at an unprecedented rate, and businesses are getting the opportunity to connect themselves to Asia’s popular social media sites.

Facebook is the predominant social media website in Asia Pacific, but there are homegrown sites that are becoming popular as Facebook is facing the wrong side of a peak.

The main complaints about Facebook are privacy concerns and overstuffed and time-consuming layouts that are starting to turn people away. New social media sites in Asia create easier and more attractive pages for people to post pictures and message each other.

Businesses can hop on these sites with advertisements that are less gaudy and out-of-place than those on Facebook.

And businesses should be hopping on these websites and creating pages because these sites are likely going to turn the tables and come to America within a few years.

Appealing Asian social media sites have so far corrected the wrongs of Facebook while still resembling it and serving the same purposes.

40% of the world’s Internet users are based in Asia Pacific, and unlike other parts of the world, a majority of their time is spent on social media.

There is a younger skewing audience on social media in Asia – teens, even tweens are dominating Asia’s dramatic increase in users.

Some businesses shy away from advertising to that age group, but teens are relied on for predicting the next trends and whether websites will stick or not. Businesses can use this to their advantage, and get early ads on upcoming sites.

On the business side of things, Asia has the third biggest economy of the seven continents, and it’s growing much more rapidly than the largely stagnant Europe and North America.

Businesses should start seeing the continent as a viable competitor and as a whole source of new customers and income. 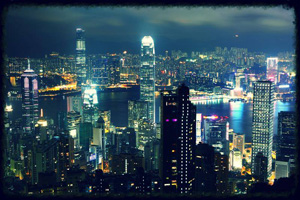 A whopping 68% of the world’s international firms have offices in Hong Kong. It is a wealthy and competitive area, and getting involved with social media in the region could benefit any company.

Asian websites are growing more quickly than American ones, the mix of their sites potentially overtaking Facebook and the opportunity to clearly advertise to millions of users makes Asia’s social media rise a strong force for businesses and average people alike.