Amazon This mega online retailer is back with some new holiday social media campaign strategies. Amazon’s Facebook page has over 22 million likes, while its Twitter page has about 865,000 followers.

If we take a closer look at some of the company’s new strategies, we can see how they are trying to increase their Twitter presence.

By using the hashtag #amazondebate, Amazon social media is promoting engagement on its Twitter feed by encouraging followers to connect to each other using holiday prompts that Amazon’s online team is creating. 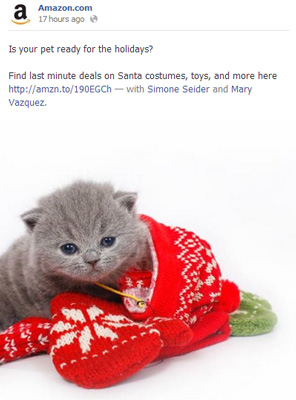 These creative debate questions and fill-in-the-blanks are exclusive to their Twitter account- their Facebook page instead lists their daily deals accompanied with festive holiday photos. Who can resist this cute face?

Amazon sells products from its own warehouses and other retailers and smaller business owners are invited to create their own selling accounts as well.

However 2013 is a challenge.  This year there are only 26 shopping days between Thanksgiving and Christmas, compared with 32 for 2012. This means that the Amazon and United Parcel Service (UPS) relationship is absolutely critical to ensure delivery and the promise of #amazondebate.

Amazon is still so concerned with delivery, Amazon unveiled a plan to deliver packages on Sundays with the help of the U.S. Postal Service to augment UPS.

Gift shopping is perhaps the most stressful part of the holiday season, so the allure of “lightening deals” without braving the hustle and bustle of the department store is appealing to many, especially when Amazon posts gift suggestions right to your newsfeed. 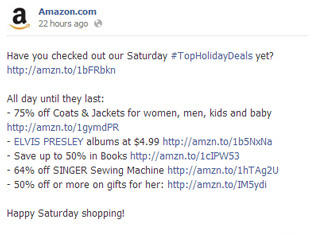 We’re excited to see what Amazon will be doing and rolling out next to attract consumers!